health, recognition, spiritual peace, or even an activity like jogging or golf. 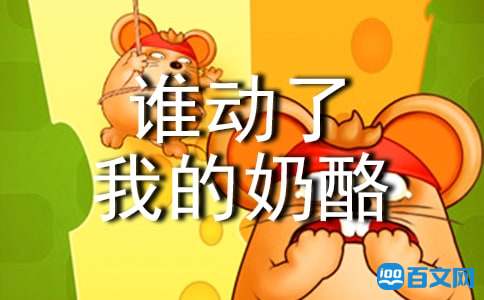 Each of us has our own idea of what Cheese is, and we pursue it because we believe it makes us happy. If we get it, we often

become attached to it. And if we lose it, or its taken away, it can be traumatic.

ONCE, long ago, there lived 4 little characters who ran through a maze looking for cheese to nourish them make them happy.

Every morning, the mice the little people dressed in their running gear headed over to Cheese Station C where they found their

own kind of cheese. It was a large store of Cheese that Hem Haw eventually moved their homes to be closer to it built a social

To make themselves feel more at home, Hem Haw decorated the walls with sayings. One read: "Having Cheese Makes you Happy".

Having Cheese Makes You Happy

One morning, Sniff Scurry arrived at Cheese Station C discovered there was no cheese.

They werent surprised. Since they had noticed the supply of cheese had been getting smaller every day, they were prepared for

the inevitable knew instinctively what to do. They were quickly off in search of New Cheese.

Later that same day, Hem Haw arrived. "What！ No Cheese. Who moved my Cheese. Its not fair！", Hem yelled. They went home

that night hungry discouraged. But before they left, Haw wrote on the wall:

The More Important Your Cheese is To You,

The More You Want To Hold Onto It.

The next day Hem Haw left their homes, returned to Cheese Station C. But situation hadnt changed. Haw asked, "Where are Sniff

Scurry. Do you think they know something we dont." Hem scoffed, "What would they know. Theyre just simple mice. They just

respond to what happens. Were little people. Were smarter."

Haw suggested, "Maybe we should stop analyzing the situation so much and just get going find some New Cheese.

If You Do Not Change,

You Can Become Extinct

Meanwhile, Sniff Scurry went farther into the maze until they found Cheese Station N. They found what they had been looking

for: a great supply of New Cheese. It was the biggest store of cheese the mice had ever seen.

Haw on the other hand become more anxious wond