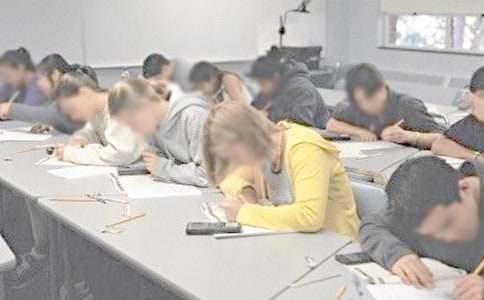 When [As soon as] the mouse saw the cat, it ran off.

Seeing the cat, the mouse ran off. 见到猫，老鼠就跑了。

真题示例：When _______ different cultures, we often pay attention only to the differences without noticing the many similarities. (2006浙江卷)

As she was very weak, she couldn’t move.

Because she was much discouraged, she moved on to London.

If you work hard, you will succeed.

If we are united, we stand; if we are divided, we fall.

If we had been given more time, we could have done it better.

Although living miles away, he attended the course. 虽然住在几英里以外，他仍去上课。

He sat in the chair reading a newspaper. 他坐在椅子上看报。

He came in, followed by his wife. 他走了进来，后面跟着他的'妻子。

My cousin came to see me from the country, ______ me a full basket of fresh fruits.

A. brought B. bringing C. to bring D. had brought

We often provide our children with toys, footballs or basketballs, _____ that all children like these things.

A. thinking B. think C. to think D. thought

He came as we expected.

He came as he was expected.

He fired and killed one of the passers-by.

He fired, killing one of the passers-by. 他开枪了，打死了一个过路人。

He died and left his wife with five children.

He died, leaving his wife with five children. 他死了，留下他妻子和五个孩子。

He glanced over at her, ______ that though she was tiny, she seemed very well put together.

A. noting B. noted C. to note D. having noted

Speeding off in a stolen car, the thief thinks he has got a great catch. But he is in for an unwelcome surprise. (06.6旧)

_____ by the superstars on television, the young athletes trained hard and played intensely.

When applying for a job, one usually has to submit a resume or curriculum vitae (CV). Alarmed by this state of _____ , the Japan Automobile Manufacturers Association (JAMA) proceeded a comprehensive study of the market in 2006. (09.完形)

Sticking to the low end of the government estimates, the National Resources Defence Council says there were maybe no more than 3.2 billion barrels of economically recoverable oil in the coastal plain of the ANWR, a drop in the bucket that would do virutally nothing to ease America's energy problems..