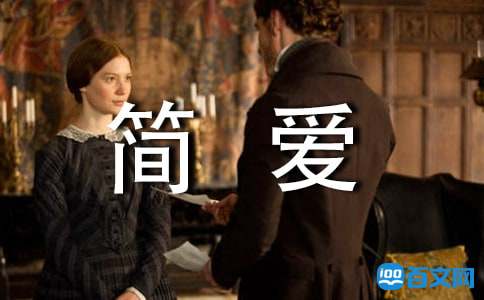 Jane Eyre, is a poor but aspiring, small in body but huge in soul, obscure but self-respecting girl. After we close the covers of the book, after having a long journey of the spirit, Jane Eyre, a marvelous figure, has left us so much to recall and to think:

We remember her pursuit of justice. It’s like a companion with the goodness. But still, a virtuous person should promote the goodneon one side and must check the badneon the other side.

We remember her self-respect and the clear situation on equality. In her opinion, everyone is the same at the God’s feet. Though there are differences in status、in property and also in appearance, but all the human being are equal in personality.

We also remember her striving for life, her toughneand her confidence…

When we think of this girl, what she gave us was not a pretty face or a transcendent temperament that make us admire deeply, but a huge charm of her personality.

Actually, she wasn’t pretty, and of course, the ordinary appearance didn’t make others feel good of her, even her own aunt felt disgusted with it. And some others even thought that she was easy to look down on and to tease, so when MiIngram met Jane Eyre, she seemed quite contemptuous, for that she was obviously much more prettier than ‘the plain and ugly governess’. But as the little governehad said: ‘Do you think, because I am poor, obscure, plain, and little, I am soulleand heartless? You think wrong!’ This is the idea of equality in Jane Eyre’s mind. God hadn’t given her beauty and wealth, but instead, God gave her a kind mind and a thinking brain. Her idea of equality and self-respect impreus so much and let us feel the power inside her body.

Her story makes us thinking about life and we learn much from her experience, at least, that is a fresh new recognition of the real beauty.

Jane Eyre was published in 1847 under the androgynous pseudonym of "Currer Bell." The publication was followed by widespread success. Utilizing two literary traditions, the Bildungsroman and the Gothic novel, Jane Eyre is a powerful narrative with profound themes concerning genders, family, passion, and identity. It is unambiguously one of the most celebrated novels in British literature.

Born in 1816, Charlotte Bronte was the third daughter of Patrick Bronte, an ambitious and intelligent clergyman. According to Newsman, all the Bronte children were unusually precocious and almost ferociously intelligent, and their informal and unorthodox educations under their father’s tutelage nurtured these traits. Patrick Bronte shared his interests in literature with his children, toward whom he behaved as though they were his intellectual equals. The Bronte children read voraciously. Charlotte’s imagination was especially fired by the poetry of Byron, whose brooding heroes served as the prototypes for characters in the Bronte’s juvenile writings as well as for such figures as Mr. Rochester in Jane Eyre (2)。 Bronte’s formal education was limited and sporadic – ten months at the age of 8 at Cowan Bridge Clergy Daughters’ School (the model for Lowood Institution in Jane Eyre)， eighteen months from the age of 14 at Roe Head School of Miss Margaret Wooler (the model for Ms. Temple) (Nestor 3-4)。 According to Newman, Bronte then worked as a teacher at Roe Head for three years before going to work as a governess. Seeking an alternative way of earning money, Charlotte Bronte went to Brussels in 1842 to study French and German at the Pensionnat Heger, preparing herself to open a school at the parsonage. She seems to have fallen in love with her charismatic teacher, Constantin Heger. The experience seems on a probable source for a recurrent feature in Bronte’s fiction: “relationships in which the inflammatory spark of intellectual energy ignites an erotic attraction between a woman and a more socially powerful man” (Newman 6)。 The Brontes’ efforts to establish a school at the parsonage never got off the ground. Still seeking ways to make money, Charlotte published, with her sisters, the unsuccessful Poems by Currer, Ellis, and Acton Bell. Her first effort to publish a novel, The Professor, was also unsuccessful. Jane Eyre, published in October 1847, however, was met with great enthusiasm and became one of the best sellers. As “Currer Bell” Bronte completed two more novels, Shirley and Villette. She married Reverend William Bell Nicholls in 1854 and died nine months later, at the age of thirty-nine in 1855 (Nestor 4-5)。

The story of Jane Eyre takes place in northern England in the early to mid-19th Century. (“Jane Eyre” 151) It starts as the ten-year-old Jane, a plain but unyielding child, is excluded by her Aunt Reed from the domestic circle around the hearth and bullied by her handsome but unpleasant cousins. Under the suggestion of Mr. Lloyd, an apothecary that sympathizes Jane, Mrs. Reed sends Jane to Lowood Institution operated by a hypocritical Evangelicalist, Mr. Brocklehurst, who chastises Jane in front of the class and calls her a liar. At Lowood, Jane befriends with Helen Burns, who helps the newly arrived Jane adjust to the austere

This is a story about a special and unreserved woman who has been exposed to a hostile environment but continuously and fearlessly struggling for her ideal life. The story can be interpreted as a symbol of the independent spirit.

It seems to me that many readers’ English reading experience starts with Jane Eyer. I am of no exception. As we refer to the movie “Jane Eyer”， it is not surprising to find some differences because of its being filmized and retold in a new way, but the spirit of the novel remains----to be an independent person, both physically and mentally.

Jane Eyer was a born resister, whose parents went off when she was very young, and her aunt，the only relative she had，treated her as badly as a ragtag. Since Jane’s education in Lowwood Orphanage began, she didn’t get what she had been expecting——simply being regarded as a common person, just the same as any other girl around. The suffers from being humiliated and devastated teach Jane to be persevering and prize dignity over anything else.As a reward of revolting the ruthless oppression, Jane got a chance to be a tutor in Thornfield Garden. There she made the acquaintance of lovely Adele and that garden’s owner, Rochester, a man with warm heart despite a cold face outside. Jane expected to change the life from then on, but fate had decided otherwise: After Jane and Rochester fell in love with each other and got down to get marry, she unfortunately came to know in fact Rochester had got a legal wife, who seemed to be the shadow following Rochester and led to his moodiness all the time ----Rochester was also a despairing person in need of salvation. Jane did want to give him a hand, however, she made up her mind to leave, because she didn’t want to betray her own principles, because she was Jane Eyer. The film has finally got a symbolist end: Jane inherited a large number of legacies and finally returned. After finding Rochester’s misfortune brought by his original mad wife, Jane chose to stay with him forever.

I don’t know what others feel, but frankly speaking, I would rather regard the section that Jane began her teaching job in Thornfield as the film’s end----especially when I heard Jane’s words “Never in my life have I been awaken so happily.” For one thing, this ideal and brand-new beginning of life was what Jane had been imagining for long as a suffering person; for another, this should be what the audiences with my views hoped her to get. But the professional judgment of producing films reminded me to wait for a totally different result: There must be something wrong coming with the excellence----perhaps not only should another section be added to enrich the story, but also we may see from the next transition of Jane’s life that “Life is like a box of chocolates, you never know what you would get.” (By Forrest Gump’s mother, in the film “Forrest Gump”)

What’s more, this film didn’t end when Jane left Thornfield. For Jane Eyer herself, there should always be somewhere to realize her great ideal of being independent considering her fortitude, but for Rochester, how he can get salvation? The film gives the answer tentatively: Jane eventually got back to Rochester. In fact, when Jane met Rochester for the first time, she scared his horse and made his heel strained, to a certain extent, which meant Rochester would get retrieval because of Jane. We can consider Rochester’s experiences as that of religion meaning. The fire by his frantic wife was the punishment for the cynicism early in his life. After it, Rochester got the mercy of the God and the love of the woman whom he loved. Here we can say: human nature and divinity get united perfectly in order to let such a story accord with the requirements of both two sides. The value of this film may be due to its efforts to explore a new way for the development of humanism under the faith of religion.